What is Soil Modification?

Lime-based reagents are often used to dry wet subgrade soils at construction sites. The benefits of lime reach far beyond drying applications with permanent strength gains associated with soil stabilization and the benefits of soil modification. The beauty of lime is that all these benefits can be realized with one process, improving existing material and eliminating the need for costly remove and replace operations. 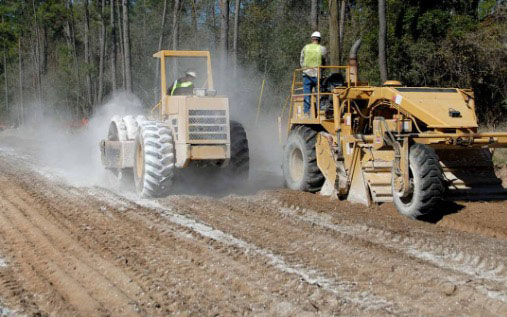 From a moisture density relationship, soil modification increases the OMC and then decreases the MDD. Essentially, the system can incorporate more water making it easier to achieve targeted compaction. As a result, for example, an overly wet, weak soil can be modified, decreasing the amount of drying necessary to reach MDD for optimal compaction.

After modification, improvements to critical water contents are observed. The soil’s liquid and plastic limits are altered to a point where the resulting plasticity index (PI) is reduced. The PI is a measurement of the range in moisture contents where a soil shows plastic properties and can be permanently deformed. From an engineering perspective, the lower the PI the better the soil.

The reduction of the shrink-swell potential is a huge benefit of soil modification. Clay soils can hold a large amount of water when saturated. If allowed to dry out, the loss of water leads to shrinkage. Therefore, if water content is not kept constant, large volume changes will ultimately result in damaging conditions negatively affecting any structure built upon it. Soil modification can minimize, if not eliminate, the possibility of shrinking and swelling giving an improved, structurally stable foundation. See Expansive Soil: Foundation Problems

The result of soil modification is an engineered fill material that is much more workable. The change in soil texture from plastic clay to a more friable material, allows for continual delivery of materials to the job site and keeps workers out of the mud.

How to Modify Soil?

Soil modification targets the clay portion of soil. The more clay present in the soil, the more modification is possible. Clay particles are sheet like and are typically negatively charged, leading them to be positioned in “edge-to-edge” orientation. Additionally, clay particles can hold a large amount of water lubricating the individual grains allowing them to easily slide around each other creating instability.

Clay soils react well with calcium-based reagents like quicklime and Calciment LKD resulting in cation exchange and molecular flocculation and agglomeration within the soil. Cation exchange is a process where divalent calcium ions from quicklime or Calciment LKD replace monovalent ions that are present on the surface of clay particles. During this process, positive and negative charges interact causing the clay particles to rearrange to edge-to-face orientation while releasing water. This molecular flocculation and agglomeration results in friction that translates to immediate strength gains.

Pre-project geotechnical reports classify and often define site areas and soils that may need to be modified. Further lab analysis is completed at the Carmeuse Innovation Center’s soil lab using specialized equipment. Multiple dosage rates of different soil improvement reagents are incorporated with soil samples to verify the possible degree of improvement. Although not an exhaustive list, improvements to PI, UCS, bearing capacity, swell testing and moisture-density relationships are carefully assessed. Each treatment option is compared to determine the best course of action or mix design for each soil before our experts give their recommendations. On site “trial and error” is possible, but not recommended, when other factors do not permit a more detailed plan. The result of a proof roll can indicate whether soil modification is needed or if sufficient modification has occurred.